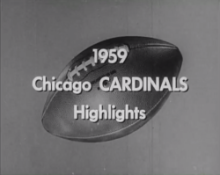 JENKINTOWN, Pennsylvania — Tim G. has obtained two classic Chicago Cardinals videos from Rare Sportsfilms, Inc., each showcasing Joe Boland's sportscasting craft in the two years prior to his untimely death in 1960. The 1958 and 1959 Season Highlights videos were both originally sponsored by the Falstaff Brewing Corporation of St. Louis, Missouri.

The Cardinals, did not perform particularly well in either season, earning a record of 2 wins, 9 losses, and 1 tie in 1958, and 2 wins and 10 losses in 1959. The sportscasting, of course, was top notch, with Joe Boland as positive as ever and optimistic for the future.

Boland would not live to see this future. He died of a heart attack in February of 1960, and the 1959 Season Highlights video was released posthumously. Paul Christman, Joe's color commentator, for these seasons, paid tribute to his "late and great" colleague at the end of the video. The Cardinals themselves moved to St. Louis for the 1960 season, where their win-loss record improved substantially.

Rare Sportsfilms, Inc., retains the distribution rights for these videos. Private showings may be arranged, or you can purchase your own copies of the 1958 and 1959 Chicago Cardinals Season Highlights through the Rare Sportsfilms web site. ⬮